Last weekend, we participated in Halifax Game Jam 2013 (facebook), our second participation in this annual event, with friends:

In front: Me (left), Stephen Brown of Game Radiator (right).
Behind: Wayne Muise of MudMonger Games with a friend watching.

We each worked on our own games. I prototyped the God Particle: 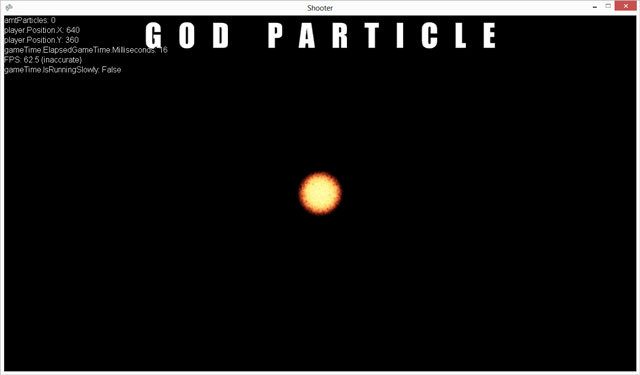 The God Particle. That's you. Aren't you cute?
Cute, but powerful enough to create a universe.

This year, the theme was "discovery". Even though I entered with the notion of prototyping the God Particle regardless of the discovery theme, it just happens to be a huge part of the game's philosohpy. Very well played, laws of coincidences.

God Particle is a 2D puzzle-oriented gaming concept that explores the true nature of the universe and teaches the concept of emergence, which is complexity from simplicity. The understanding of emergence, or rather the lack of it, is the very thing that restricts people from understanding science, such as abiogenesis, evolution, and the formation of the universe (galaxies, solar systems, stars, and planets).

Ultimately I want the game to demonstrate emergence without the need for the God Particle (the character or particle you control) at all, and simply use the God Particle as a means of interactive exploration of the universe, or even multiverse.

There is no true goal. It's almost about freedom. More importantly, I wanted to teach the concept of emergence, where beautiful and interesting things happen just out of simple laws playing themselves out. I prototyped it, and it works! 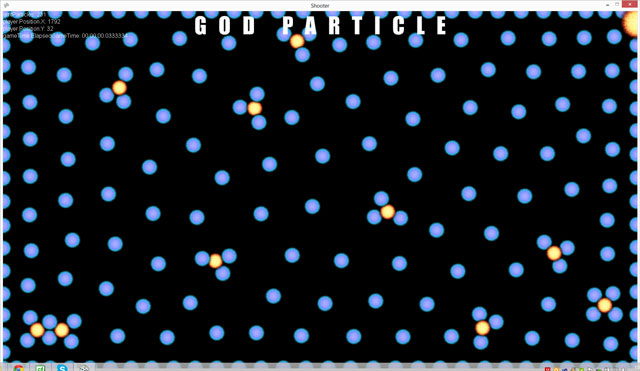 The only rules above are that opposites attract and everything else repels. If you saw this is real life, all the particles are jiggling with life. It is amazing to watch.

It is interesting that pressure, resistance, the path of least resistance which every particle follows, and all of these notions are nothing more than concepts. They do not exist. They are simple explanations for fundamental occurrences. Almost everything that you know is merely a construct much in the same way. Solidity is a construct. Color is a construct. Pressure. Heat (which is just the giggling in giggling atoms). All of it, nothing but constructs. 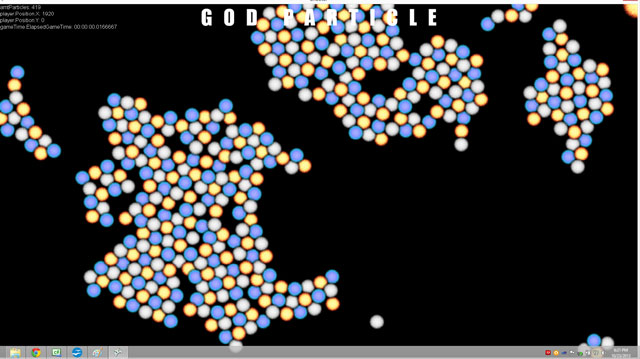 Even molecules/structures form without design.

If you look closely above, you can see that no alike particles are touching. Actually, you may find a few similar particles touching, but they do not "want" to be touching! So, each particle is almost always surrounded by exactly six opposite and alternating particles. And the same applies for all the particles​. Blue, yellow, or white. And this starts from random chaos and always forms. This is emergence.

The game is unrelated to the Higgs Boson. The naming convention is related to the fact you are the only particle in the universe with free will, and the ability to do whatever you want, disobeying the laws of physics, creating or changing the lays of physics, creating or destroying matter and anti-matter, etc. It is a free world, to you, but to everything else the laws of physics must be obeyed. It is in this sense that you are a "God" particle, rather than a drone particle. If someone can think of another name that better suits this game, please let me know!

Speaking of "drone particles", it's amazing the creativity of "drones" that follow simple rules, when they follow them all of the time without exception, and with no explicit knowledge of each other, and with no "planning" or "preparation" for future events. Everything you see in these screenshots just happens naturally.

The very observant of you will notice that I piggybacked off of the 2D XNA Tutorial to create this game. That is why the game is titled, "Shooter". If you wish to get into game development, or wish to prototype a quick game concept in a night or a weekend, then I encourage you to go through this tutorial as well. There is also a 3D tutorial, but if you are going 3D might I suggest UDK or Unity instead.

I need to "play" with this more and see what I can do with it. It might be our first Xbox One game, which is big news I suppose, that we were selected to be official developers of Xbox One. Only a select few indie studios have been allowed in as they have done away with the indie section. So, this is an amazing opportunity for us.

The God Particle official site will be xona.com/godparticle. The release date is unknown. It may be developed for  Xbox One, PS4, and Windows PC.