(Note: This page used to be a part of my online resume at matthewdoucette.com, so it reads as a portfolio piece.)

Everything on this page is self-taught, with help from Jason Doucette in 3D programming (he invented the 3D formula in grade 8), demo effects, procedural 3D modelling, and more.

This was preliminary work on my "To Be Continued..." demoscene release the next year.

Screenshots from demo effects I coded after the "To Be Continued..." demo. The effects here make use of the 3Dfx Voodoo 2 dual-texture features, allowing the use of two textures at once.

Consider these two effects I coded: 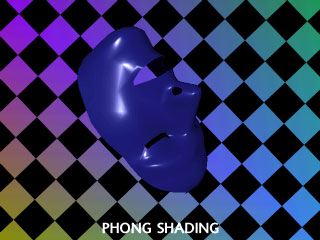 Look a the mask renders above, and compare them. The dual textures allow me to use one texture to emulate phone shading (something the 3D card cannot do on its own) and have an additional texture to do the texture mapping that was missing in my "To Be Continued.." demo.

The work here is a follow up to development on "To Be Continued..", which was released on April 2nd, 2019. The work here uses the 3Dfx Voodoo 2 features,where as "To Be Continued..." only used Voodoo 1 features. The main difference being dual-textures; The Voodoo 2 was essentially two Voodoo 1 chips together, which allowed it to texture map two textures onto each triangle at at time, allowing for interesting effects to be coded. Some of the effects I coded with this ability was some you see below, such as detail textures and phong shading with texture mapping -- interesting as my phong shading technique requires a texture of its own.)