We took part in the Halifax Game Jam 2011 (Facebook) this past weekend and won "Best in Destructable Terrain" with Raccontra, a game prototype. The theme was "Cartoon Demolition Animals", which was three randomly selected words from a pot of random words submitted by all participants. "Raccontra" is a portmanteau of "raccoon" and "Contra". It is pronounced "ra-contra".

The game jam was an opportunity to explore a Contra-style destructable terrain game/engine that has been on our minds for years. The game and engine was developed from scratch in 47 hours by lead coder Jason Doucette without sleep. The level art and design was developed by Matthew Doucette. A long time friend, Wayne Muise of MudMonger Games, composed the soundtrack. Additionally, two others helped code minor parts of the game such as the character animation and integration with a third party tilemap level editor and another artist created the character artwork. 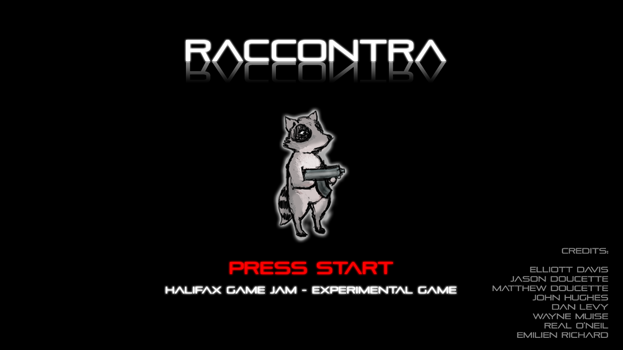 We may have just prototyped the next hit game from Xona Games! 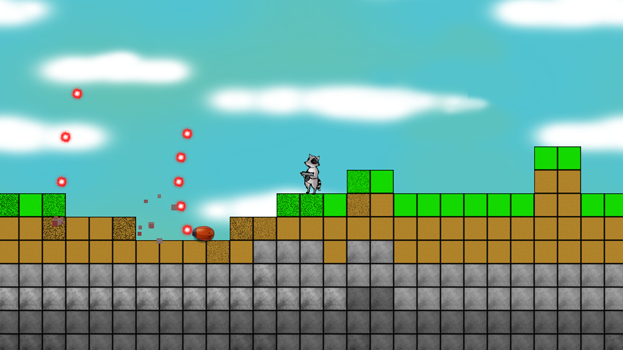 Is that the spreader weapon? Aw yeah. 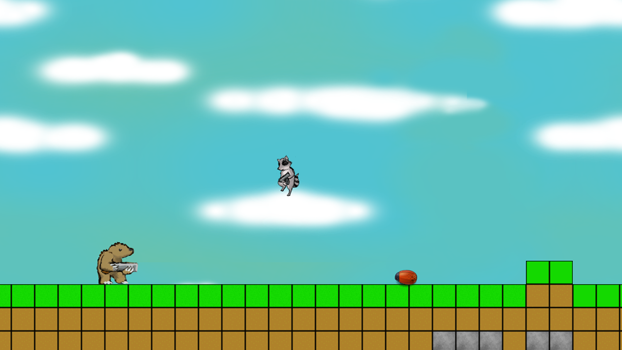 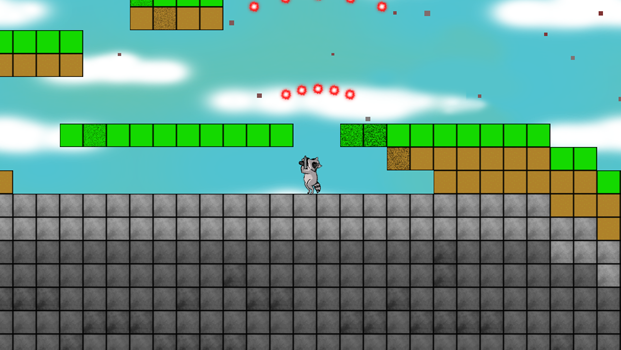 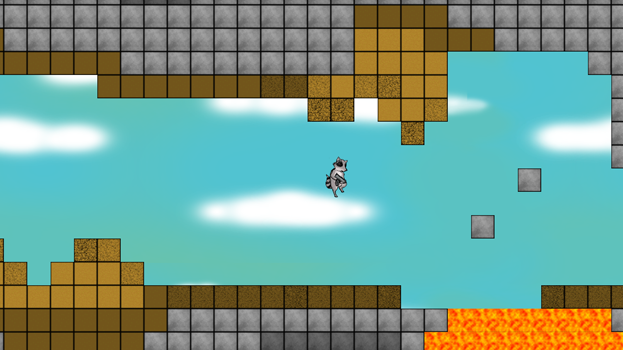 Since the game jam, the game has been renamed (as of yet an unreleased name) and all non-Xona game jam work has been removed from the game, such as coding and the animal protagonist artwork. We have explored new ideas without the constrainsts of the game jam, constraints which include the "Cartoon Demolition Animals" theme as well as dividing ownership among the work.

Our continued work on the game raised interesting concerns about entering a game jam as a "professional" company, looking to explore ideas, working with "amateur" developers. Of course, I am using "professional" in the sense of owning a company and making money and "amateur" in the sense of hobbyist, and I am using neither in relation to skillsets, so there is no need for any offense to be taken.

Working on a game together mixes ideas, which is a part of the brilliance of game jams. But, what if a game jam to used to explore one's ideas, and then others join the team and want percentage ownership of those ideas? While in the design phase of the game jam, ideas are bounced off each other and potentially evolve. One could argue that everyone in the design conversation owns whatever idea is produced or concluded.

In the case of Raccontra, the idea of a Contra-style game with destructible terrain has been an idea of ours for a long while. We have design docs on it. We have many ideas. Every game jam we enter will almost surely be exploring an idea of ours. To us, game jams are not about the creation of ideas, but the exploration and cultivating of already existing ideas. But, in doing so, do we relinquish those ideas from our professional entity, Xona Games Inc.? Do we not fit the standards, freedoms, and essence of game jams? Should we be restricted and unallowed to explore our idea further, professionally, because we decided to base a game jam around them and let other indie developers in the mix?

The majority of games produced by game jams have no productive value, so there is no concern in such cases. But what if the idea has potential?

We reached the conclusion that a game jam should not be a restrictive endeavor. No more than discussing game ideas to a friend should then restrict you to use those ideas, especially when the job we do is making games. It's what we do. We should be allowed to do it, regardless if we talk about it in a non-professional session such as chatting to a friend or participating in a game jam. It goes both ways. This means that the ideas I share are free to be used by others involved in these non-professional sessions.

Ultimately, we made it clear to everyone involved in the game jam that we owned the rights to the game, not "Raccontra" (as we do not care about it specifically) but to the game it has developed into from our subsequent work, and that we have removed all code and assets belonging to others within the game. Nothing in the game includes work, code, or ideas, that has not originated from one of the authors at Xona Games.

Also, we founded a new personal rule on entering game jams, which is: Be upfront that the game jam will be used to produce and explore our own ideas and we will maintain rights to those ideas after the game jam. This allows those who disagree to not be mislead, and they are free to join another team. And it allows us free reign to explore our potentially valuable game ideas without restriction. We promise to make this point clear at the beginning of all future game jams.

If you have any comments, feel free to contact us.