Here is the full review:

Although this generation of consoles has only been around for a shade under three years, arguably one of the best aspects has been the retro inspired releases. Xona Games has developed a follow-up to their widely successful Score Rush that graced the Xbox Live Marketplace for the Xbox 360. Outside of the two-dimensional bonus modes included in Geometry Wars 3: Dimensions, the classic style shoot ‘em up genre has been relatively disappointing. A bullet hell shooter, Score Rush Extended stands out from the crowd by dialing things way past 11 from the get-go and doesn’t let up. Ever.

Score Rush Extended features two different game modes; Score Rush and Boss Rush. Straying away from non-essential gameplay elements, the game focuses on the thrill of a classic arcade game. It’s a simple premise; survive waves of basic geometry shaped enemy ships of varying sizes before reaching a boss and continuing upon your path of destruction. Boss Rush alters the gameplay slightly, eliminating the waves between the bosses and pitting you against the massive monstrosities one after another. 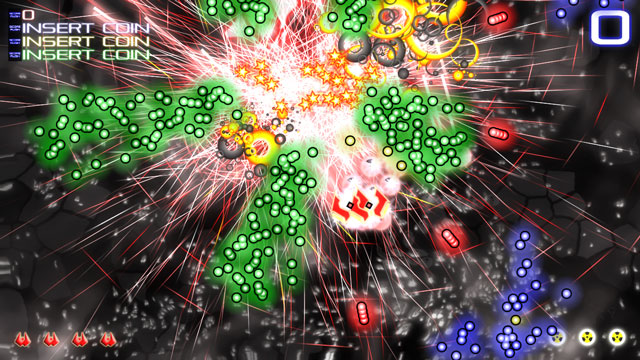 Your ship is relatively large in comparison to enemy projectiles, but thankfully you don’t have to worry about your entire craft being struck. Only the small center dot of the ship is vulnerable, allowing for some pretty nifty and intense moments where you dodge bullets left and right, narrowly avoiding bullets that scream across your wings. To help you stay alive as long as possible, you can hold down R1 to slow down your ships movement. At first, I thought it would slow down the action, and perhaps utilize a special meter that limited its use, but to my surprise, only your ship slows down. It's a neat feature to include, especially if you find yourself getting cornered. If you find yourself surrounded with no hope of escaping, you are given a handful of bombs that will clear the screen of projectiles. 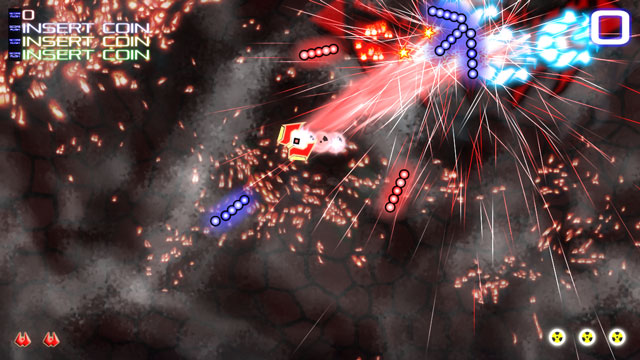 There are no new ships to master, weapons to unlock or “magic” missiles that will automatically target enemies across the screen. Instead, the game stays true to its arcade roots, featuring upgrades for your constantly firing laser, as well as acquiring small orb-like drones that will follow your ship. The orbs fire in the same direction as your ship, so once you have a fully upgraded ship, you’ll be covering an insane amount of on-screen real estate. Collecting either power-up when you are already maxed out gives off a colored wave (matching the color of your ship) that cancels nearby bullets. I don’t need to tell you, but it has saved my life on many occasions. The game allows over 30 orbs to follow players, a feat I have only achieved once, so you can only imagine the chaos that erupts from every player having a long trail of orbs following them around.

While not including any online multiplayer options, Score Rush Extended does feature local cooperative gameplay for up to four players. Players can join in at any time, in fact, while you are playing, the top left corner of the screen teases others to “insert coin” to join. As an arcade-style title, hunting the high score on the leaderboard is your primary objective. There are two sets of leaderboards, broken out by the game’s three difficulties along with if you are playing as solo or dual ships. Dual ships give you control of two connected ships, allowing you to destroy enemies with double the firepower at the cost of managing two hit points instead of one. So basically, if you only have two players, the game feels like you have four, as you have four ships continuously firing and destroying foes. When one ship is destroyed, you still have control of the other one, and it takes a few seconds for the destroyed craft to return. In multiplayer, lives are a shared resource, but as long as one player remains alive, everyone will continue to respawn, albeit at a much slower rate. 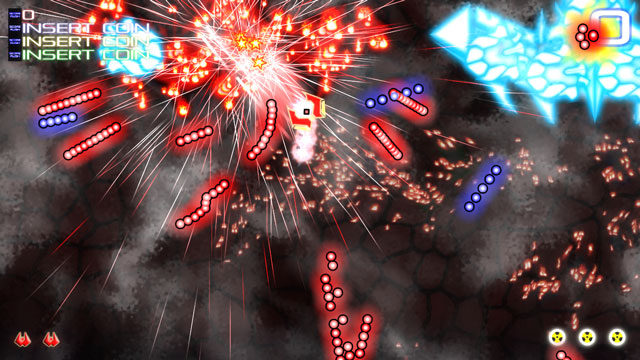 Without any unlockables (outside of the additional two difficulties) players are taken back to the age when arcades ruled the video game landscape and kids had pockets full of quarters and pride up for grabs. With the sheer amount of colors, shapes and visual effects flying across the screen, it is quite easy to lose yourself in the non-stop action. Score Rush Extended features a slew of color options, changing the default deadly multicolor bullets that kill you in a single hit into twelve additional color variations. It works remarkably well for anyone having trouble separating the shots from the monochromatic backgrounds. Even the glow and flashing pattern inside the bullets can be customized to your liking.

The included customization options allow anyone to ensure they have the best chance of achieving a high ranking on the leaderboards. As for myself, I’ll be glad when I finally crack the top 100 on the normal difficulty. There are separate leaderboards depending on the amount of players, so you don't have to worry about ranking against a team of four, if you are playing with anything less. Taking a look at the leaderboards for single-player (how I mostly play), currently less than ten players have unlocked the “godlike” difficulty in the game in both game modes. Maybe I'll unlock it sometime in the next two-three years.

Xona Games has down a commendable job updating one of their most popular titles for the PlayStation 4. Score Rush Extended is an enjoyable experience, featuring a rocking metal soundtrack and colorful, but simplistic visuals. It’s the type of game that you can spend 10 minutes a day, inching your way up the leaderboards or lose yourself for hours. Even without playing with others, I’ve had plenty of fun with the game, but nothing matches the sensation of having four ships blast everything in sight. The game is unforgiving in the difficulty department, but that only adds to the allure and charm of the game, as I am always seeking the thrill of moving past my friends on the leaderboards.

Note: The ​Score Rush Extended review is based on a digital PS4 copy of the game, provided by the publisher