(For other version of Score Rush, see our games.) 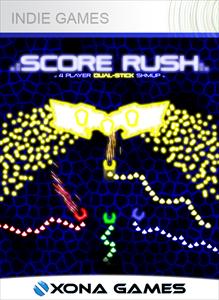 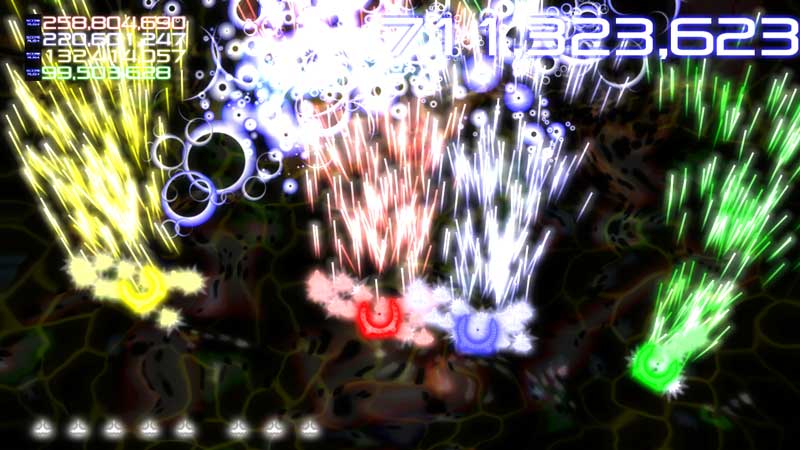 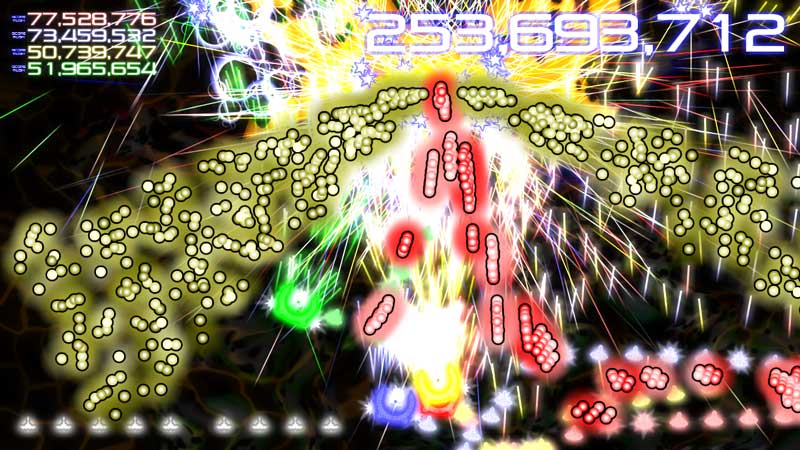 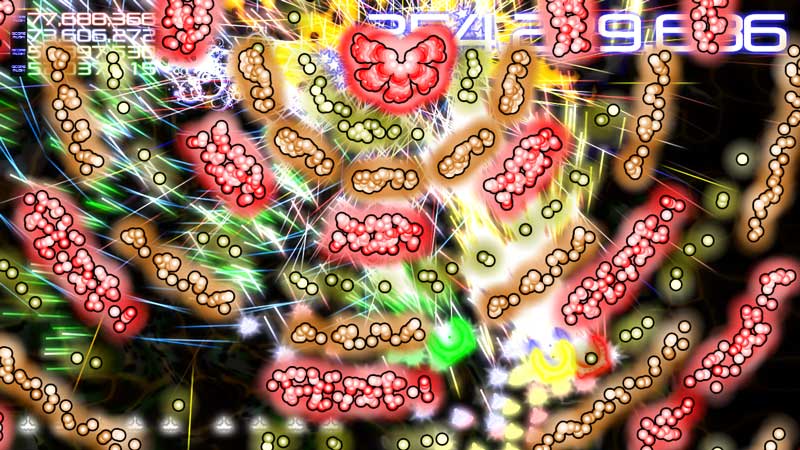 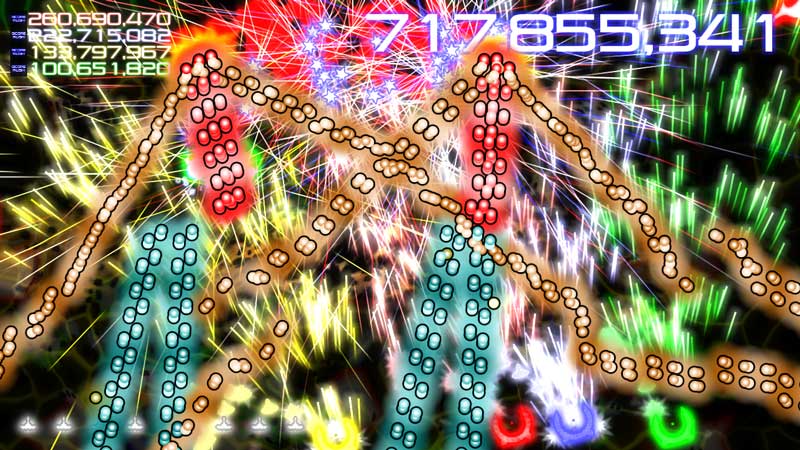 "Wow, you guys really did put a lot of effort into this game didn't you. The polish is extraordinary. The gameplay is so well balanced I can't imagine how many times you must have played it to get it right. Even the audio peaks and lows at the right times. Whoever invented the 'invincible during screen shake' is a genius. And you've used it to perfect effect, there always seem to be the right 'screen shaking alien' around at the right time to get out of jail. Some of the bullet patterns, especially the ones that cross over each other, are evil :p This game is an indie masterpiece. I hope you guys are proud of it." - Greenstone Games

"Apart from the obvious visual delight that is one of this game's strengths, I was struck by a couple more things. It's surprisingly very clean and uncluttered regards to identifying yourself in that sea of bullet hell. I'm not the greatest shooter, it must be said, but despite this I found that I was having a very satisfying time as the challenge seemed to be set beautifully." - Adrian

"Thank you SO MUCH for making one of the coolest, and most affordable games I've ever purchased or played! Score Rush is absolutely amazing, so addictive and so fun to play." - John Schuepbach

"I can't say enough how cool this game is. I've been playing games for nearly 35 years now, and I'm not exaggerating when I say that "Score Rush" is one of the coolest games I've EVER played!" - John Schuepbach

"A couple nights ago, I was playing Score Rush, a twin-stick shooter on Xbox, and thinking what an exemplary game it was. Simple, but with highly polished gameplay. Something that other designers and developers could stand to learn from." - Jay McGavren

"Can't believe I missed this video! Thanks so much for taking the time to share all this info; great interview. If you guys never made or released﻿ another game ever, Score Rush would still go down in history as one of the coolest games I've ever played. Thank you guys for following your passion and for sharing it with the world!" - Shuey187

"You guys are fucking amazing. Score Rush is one of the best shooters I've ever played, it's the best XBLIA title period. I don't want to sound cliche, but the polish is incredible and you guys are super awesome for not making it an expensive XBLA title or something. I play me the hell out of some Score Rush. The part where I rush to get a score is my favorite." - Nelson Gatlin (full feedback here)

"I just wanted to say thank you for the awesome work you did on Score Rush! I just discovered it the other day on the xbox live marketplace and I have been seriously addicted. For a smaller studio, you guys seem to put an extraordinarily high level of polish on your games and I can really see that you put a lot of thought into your development process. Your shoot em up games are some of the best I have ever played! I also really appreciate your efforts in making your games 4 player coop. It seems like couch coop is often overlooked these days, and the fact that you implement this feature just makes your games that much better! ... I would love to see another Xona Shmup game on consoles! Best wishes and good luck with future projects." - Spencer Jenik

"Score Rush has quickly become on of my favorite games on the Xbox 360. Let me clarify: Score Rush is not one of my favorites only on the XBLIG channel, but on the entire console. It's that good. I've easily put over 20 hours onto it over multiple consoles, and have campaigned the greatness of it to so many of my friends that they're beginning to wonder if I'm in your employment. Seriously, keep up the good work!" - iGrendei (Hunter Rose)

"This game is a mix of a bullet hell shooter with a twin stick shooter. ...it's almost a traditional SHMUP/bullet hell game. The music is intense. There's force feedback. The graphics are fast and amazing." - Vu, 10/10

"The music is also very well done. Try playing the game on mute and then you realize what kind of impact the sound has on the game. The music is probably one of my favorite indie game scores." - Dcon6393, 9/10

"I am going to admit it... when I generally think of XBLIG, I think of cheap badly made games with a very small few exceptions. I've tried plenty and none managed to grab my attention. That is until I saw a clip of this game whilst randomly surfing the internet. I was like "what!? 80pts?? I better download the demo!"." - Tn-1, 10/10

"1 minute into the game, I quit and immediately purchased it. If you are longing for a shoot em up fix, this is it. It even puts many premium games to shame." - Tn-1, 10/10

"What sets this apart from other bullet hell games is that it is actually a twin stick shooter, or rather, a twin stick vertical hybrid." - Tn-1, 10/10

"The controls are spot on and not once did I come across any issues, the 2 guys who made this game have really nailed it. The graphics are perfectly clear which is important when playing a bullet hell game and like all bullet hell games, your ship is huge but has a very small area,about 4 pixels, that is your hit box." - Tn-1, 10/10

"As far as gameplay is concerned, it starts out slow but soon turns into hell. I found myself inching closer and closer to the screen to keep myself concentrating on my 4 pixel hitbox. This really gets my heart pounding as I fight for survival. Well done guys. The soundtrack is also pretty good at keeping you "in the zone"." - Tn-1, 10/10

"This little gem has provided the kind of enjoyment and thrill that is normally reserved for the top of rollercoasters or a glance of the woman of your dreams." - DeadmanXIII, 10/10

"I suck at Bullet Hell shooters. There i said it. I will likely NEVER see the end screen of Score Rush. It doesn't matter one bit, the feeling of beating your personal best is reward enough. Surviving a few minutes longer, scoring that extra million points, it is gaming greatness." - DeadmanXIII, 10/10

"It's almost like the guys at Xona Games have distilled that mysterious "one more go" factor and have infused Score Rush with it." - DeadmanXIII, 10/10

"I havent even played 4 player Multiplayer yet! I may need to arrange a Score Rush party, and when you start planning your social life around a game you KNOW it has you!" - DeadmanXIII, 10/10

"Duality ZF has a lot to live up to, but given that it features a SCORE RUSH MODE i think we are in very safe hands!" - DeadmanXIII, 10/10

"My eyes and hands hurt and I have a pounding heada[che]" - PepsimanVsJoe, 10/10

"Score Rush is the sort of sensory overload that's likely comparable to getting shot into space without so much as a helmet. The colors are dazzling, the explosions are constant, and a oddly-shaped thingamajig can't fire a bullet without the an infinite number of 4th of Julys going off at once. I used to think that even in my old age(29) I could handle whatever the "shump" genre threw at me but I think thirty minutes with this game has caused me to age thirty years."

"Since I totally blew past the mid-life crisis and forgot to buy my Ferrari I guess I should talk about why you've already spent your hard-earned dollar on this game. You craved action, you sought danger, you wanted to silence the voices in your head. That guy in the back was saying "Oh No good sir! Thou must purchase a role-playing game so thou canst engorge upon ham-fisted karma decisions and inappropriate cheesecake." There was that other guy sitting next to you whispering "no uh buy a multiplayer FPS so errh you can get huh called nasty words while um getting sniped from miles away...yeah" and then your girlfriend was saying "How about seeing a movie instead?"

Too bad for them however because you bought SCORE RUSH. If you're like me you probably hurt all over. It's that feel-good kind of hurt though because even if the only ass that got kicked was your own it still feels like an accomplishment. Everything about this game is pushing those limits in your head, that part of your brain that comes to life when your square-dealie is so close to hot death its tongue gets burned. This game gets you in the zone instantly and never lets go. It's the kind of pure adrenaline that other games make you work for and at the most its precious minutes out of potential hours." - PepsimanVsJoe, 10/10

"The shear scope of Score Rush is initial intimidating. There are dozens of enemies and hundreds of bullets to dodge at any given time. However, once you get a feel for the pace of the action it starts to come naturally to dodge while taking out the biggest enemies first. The “overwhelming firepower” mentioned in the game’s description is clearly there with power ups making your ship a virtual bullet hose." - jigsawhc, 10/10

"Hurray for Xona Games! Let me lay my cards on the table. There is no better game under the XBLIG service than Score Rush. Period." - KitesAreFun (Zach), 10/10

"Talk is cheap. Download the trial. You can't escape the automatic buy that awaits shortly after. This game is on a whole new level from the typical farm feed you'll find on XBLIG." - KitesAreFun (Zach), 10/10

"Man, I love you guys! :D It's so cool to see and hear you guys talk about your passions, and I feel like we're kindred spirits because of our old school gaming history! Score Rush was one of the highlights of my entire gaming life and will always be one of my most favorite games of all time! Thank you both <3 ^_^" - Shuey187

"I loved and still love shmups! I believed and still believe that Score Rush is the best wide and vertical shmup!!" - A47, YouTube comment

"This game is the best bullethell massacre I've ever been part of. LOVE IT! Best M$ points I ever spent!" - superscatboy, YouTube comment

"Great game! Certainly one of the best of these types of shooters I've played." - Invertedzero, YouTube comment

"OMG I love this game. :) GOOD JOB!!! When is your next game coming out?" - Ryu Ramasama, YouTube comment

"Score Rush & One Finger Death Punch are the BEST 2 indie games on Xbox 360 of all time. SO INSANE!!" - Redmar Belle, YouTube comment