*Duality ZF has dual soundtracks,
among many dual features.

Duality ZF 双攻, on hold, is a 1-4 player shoot 'em up and spiritual sequel to Score Rush. Features dual play, g-mode, and option-mode, each with the ability to control two fighters at once. Ghost continues, where you receive help from your past self. Dual soundtracks by both Imphenzia and Dragon Music Production.

Awards: Two-time Dream Build Play finalist, placing #1 in Canada and #5 in the world in 2010 out of 350 games from 110 countries. Semi-Finalist in 3rd Independent Game Developer's Competition for technical excellence, we coin this as our "award-winning Duality Engine." 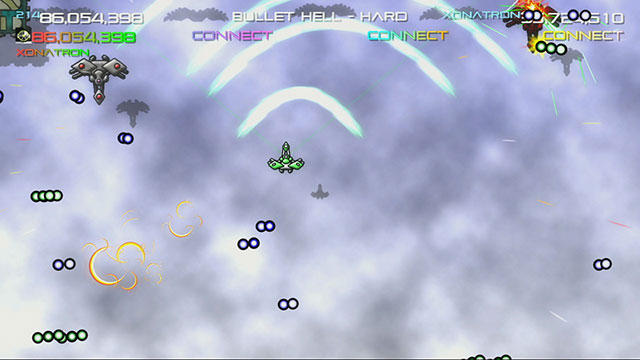 A few visual effects are new. 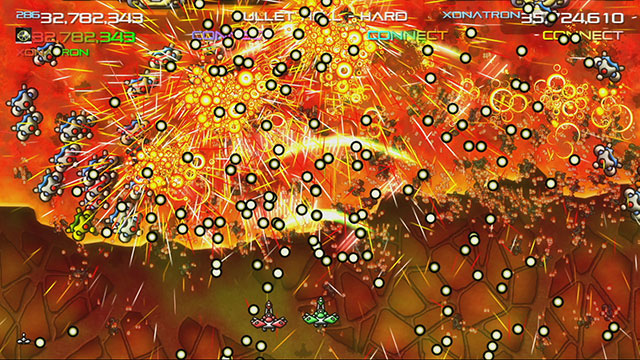 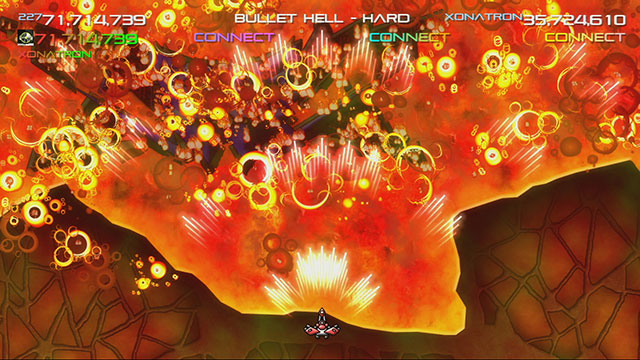 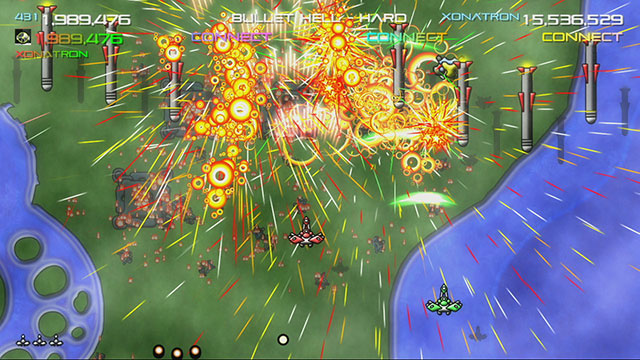 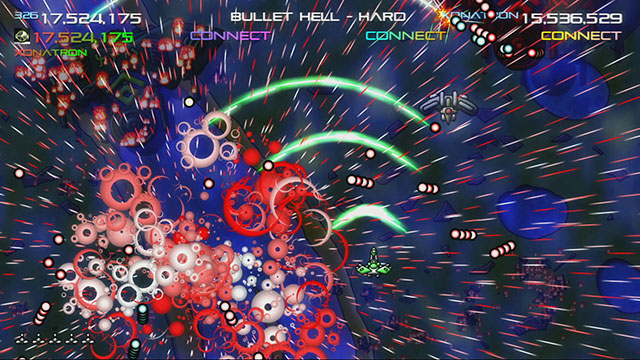 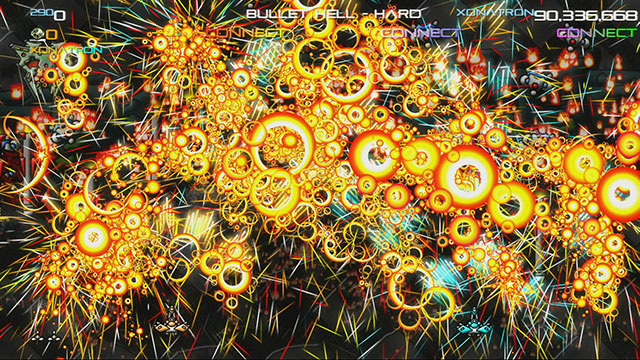 Explosions. Yours and theirs. 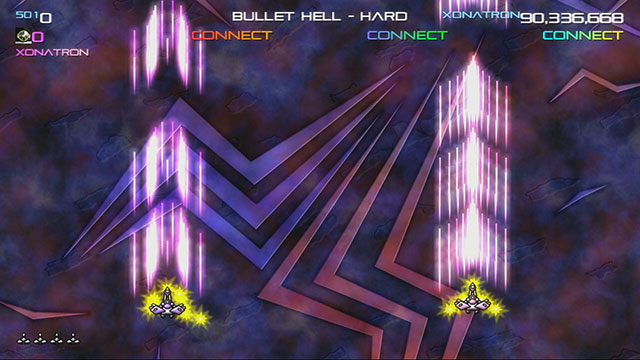 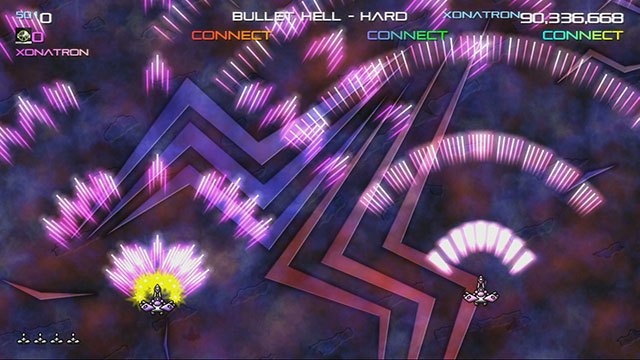 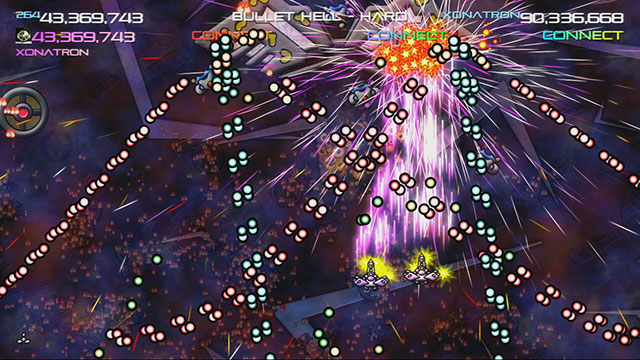 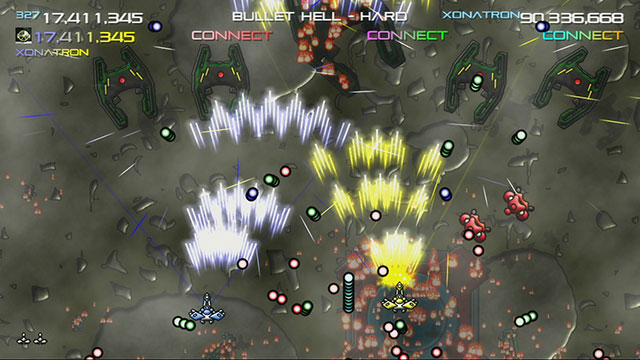 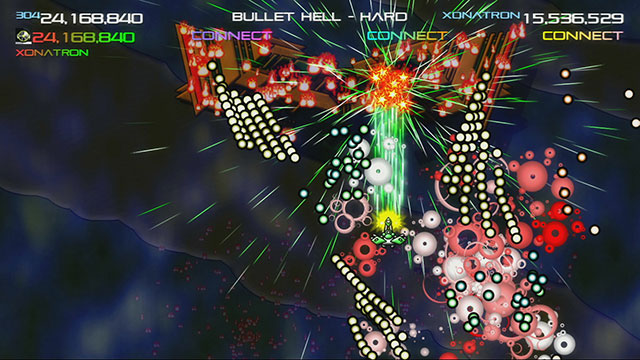 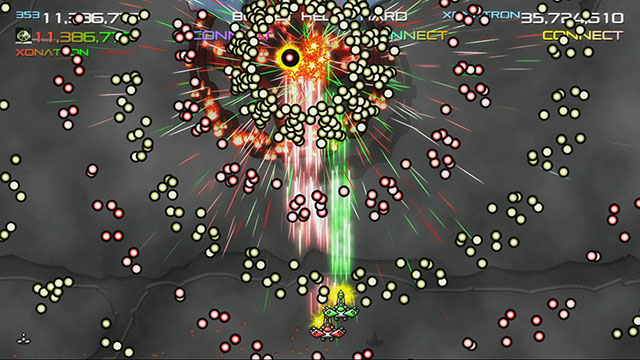 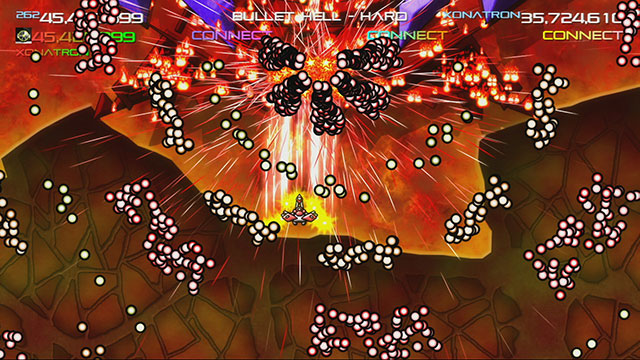 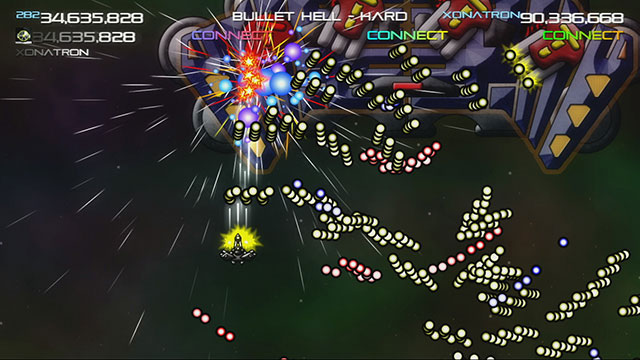 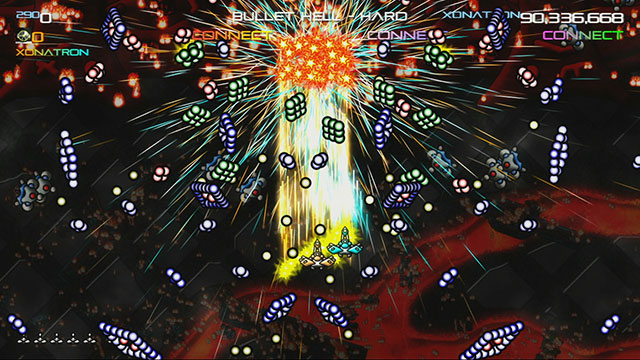 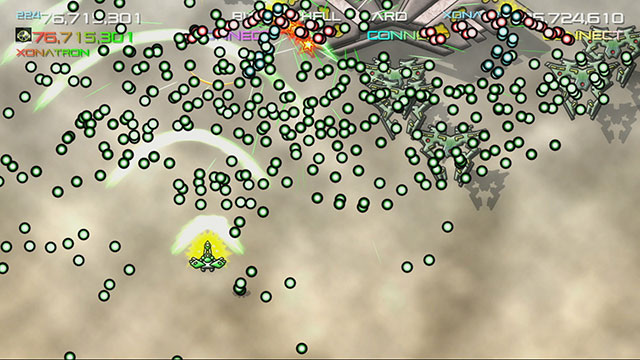 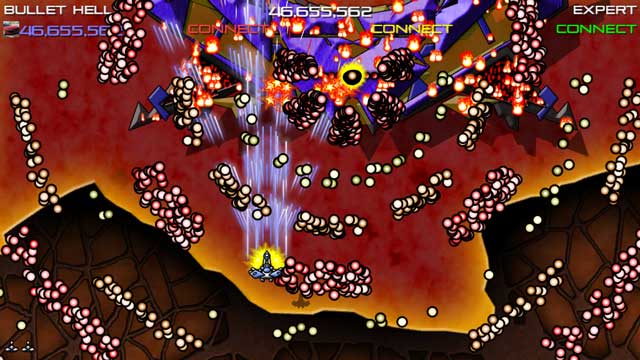 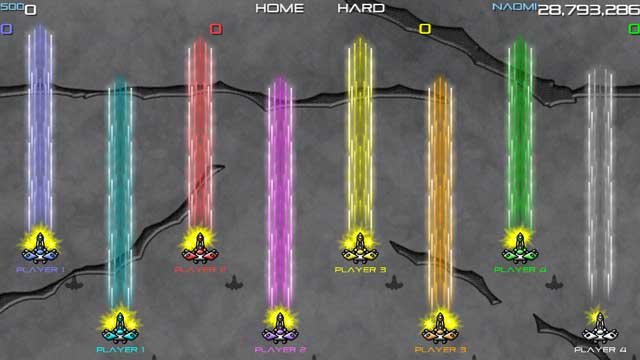 Eight independent fighters at once... a shoot'em up first. 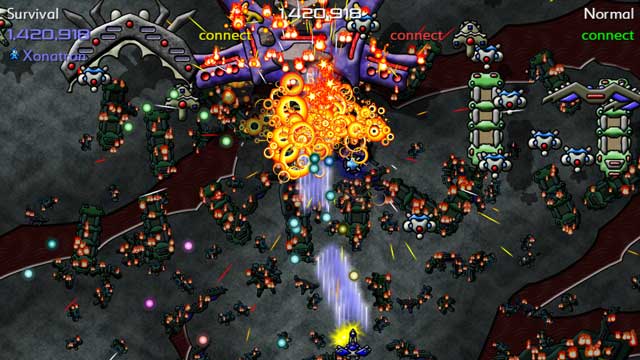 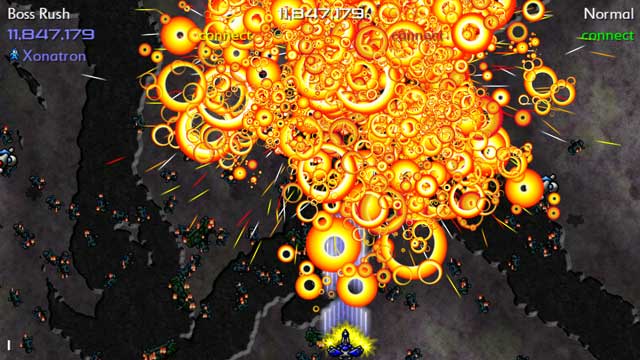 Duality ZF innovates the shoot 'em up genre with some firsts:

Duality ZF features 11 massively upgradeable weapons. The powerups have an artificial intelligence system that lures them to the players most in need, to always promote a balance of power.  These are guidelines only, and do not need to be followed.  Upon final death, the remaining powerups you would have had, had you had an extra life, spit out to all remaining fighters and friends.  The final fighter left standing will have be boosted in powerups to help battle out the remaining fight on its own.  (Also read the "revival" section.)

Lost fighters and friends are revived at the beginning of each stage, as well as after a certain time delay if your friends can stay alive long enough.

The Duality ZF fighters are extremely agile and powerful.  When you die, it is your fault, not because of poor controls or a slow fighter.  We challenge you with challenging stages, not with an inferior fighter with inferior controls, to realize your true 2D shooter potential.

The Duality ZF philosophy is:

Give the power to the player. The game’s difficulty should arise from enemy strength, not player weakness.

This subtle, but enormously important, rule of thumb is what sets Duality ZF apart from other arcade games.  Most games inhibit the player.  We power the player and challenge the player with more exciting enemy fights.

Duality ZF is a 2D shooter (shoot'em up; shmup) made by 2D shooter fans. It is the 2D shooter that we have always wanted to play. It gives us great pleasure to realize this goal and (soon) share our dream with other 2D shooter fans around the world.

Duality ZF features a beautiful Imphenzia sountrack *and* a hard-rocking Dragon Music Productions soundtrack. Everyone will enjoy the variety. It is a perfect unity to our hyper action gameplay. Imphenzia tracks have exceeded one million downloads.

"An area into which a designated ground unit or fire support ship delivers, or is prepared to deliver, fire support. Fire may or may not be observed." - Zone of Fire (mil.)

"@XonaGames Wow, you guys really have been busy! The new ships look amazing, and the ghost continues is a killer idea. Can't wait to play it!" - Tim Ambrogi, Final Form Games, creator of Jamestown

"@mdoucette  [link] Haha, and I thought I was pushing a lot of particles! Duality ZF!" - Dean Dodrill, Humble Heart, creator of Dust: An Elysian Tail

“Holy crap... Very excited about duality... Hadn't heard of it until today. Think you've got a definite hit on your hands. Look forward to picking it up. :)” - tehsuxor90210

“Mate, your game looks brilliant and hilarious and deadly serious all at once. Much kudos.” – tartley

Awesome! Thanks for sharing.
It looks really freaking cool, and the music brings back some good ole shooter memories.
Feels japanese in a good way.
I definitely look forward to play testing, reviewing and obviously buying it.
Keep on rocking.

All i gotta say is HOLY SHIT! That was impressive! I can't wait for a a video with some insane boss Matt : P

I sincerely applaud to you guys for really learning the "superb-shmup 101" rules that go around in this niche genre: that video really shows this.

I see many threads here in the dev section asking about criticism&impressions on their "shmup" but when they finally receive good constructive criticism, they either keep their fingers in their ears or act like a total cocky dumbass. BUT NOT YOU TWO!

I really hope you sell many copies of Duality: ZF. Good luck!

Day one purchase. I don't say that very often.

Wow guys looks mad good,
i take it you wont be submitting this to DBP considering your releasing it to community games.
It sounds like you guys put alot of effort in and this should be way better than so many other shmups on community games or anywhere.
It also seems like you have quite a group of people following you, good luck with everything.

“It looks absolutely incredible and is the only game that has, so far, made me think of buying an Xbox.” - R-Typer

“Oh man. I just saw that trailer for Duality ZF. I'm buying this first day it comes out.” – SFKhoa

“Wow... is that actually YOUR game? If so, very impressive. Either way though, it looks really good :)”

The port of the Raiden III arcade to the Playstation 2 (PS2) implemented DUAL PLAY before us. Technically, all simultaneous two player arcade games, like Raiden III, support DUAL PLAY. Anyone can play two players on any two player arcade game. DUAL PLAY is defined as one person playing two players on a multiplayer arcade game. In that sense, Raiden III did not *natively* support DUAL PLAY. (A fun fact is sometimes DUAL PLAY on an arcade game requires jamming the fire button down permanently.) One could also argue that all simultaneous two player console games support DUAL PLAY, too. However, it is difficult to use two console controllers at once, unlike two arcade controllers, as they do not have fixed bases. DUAL PLAY support in console games require implementing DUAL PLAY explicitly on one controller, as found in Duality ZF. So, in console games, this explicit implementation of DUAL PLAY where one controller acts as two controllers is what is considered to be DUAL PLAY support. Duality ZF is the first game to promote and attempt to popularize DUAL PLAY, and even attempt to standardize or coin or define it as "DUAL PLAY". Duality ZF is also the first game to support DUAL PLAY for multiple players. There is no other game where you can DUAL PLAY with two or more players; Duality ZF supports four DUAL PLAY players simultaneously, for an incredible eight independently controlled fighters on screen at once. Duality ZF recognizes there is only one player, and thus one score, for each group of dual fighters. Taking all of this into account, Duality ZF is the first game designed to truly support DUAL PLAY. It is much more than an implementation hack, like the PS2 Raiden III arcade port, like emulator hacks to allow one controller to feed input to two virtual controllers, or physical controller hacks which do the same thing. (Another fun fact is we did a controller hack on our Nintendo Entertainment System [NES] to control both players in Super-C [Super Contra] off one controller, back in 2001. The hack would work for any NES game, not just Super-C, of course.)