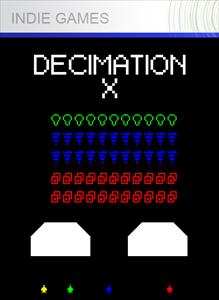 "Everything about Decimation X screams arcade cabinet fun as you see all the retro colored aliens and the colorful display of explosions." - xblaratings.com

"Decimation X is a perfect example of pick up and play arcade mayhem." - xblaratings.com

"Decimation X has to be one of the most fun retro take backs on the Indie marketplace. For only 80 Msp, I dare say everyone who has ever played and enjoyed a 2D shooter will have a blast quite literally as well. You cannot go wrong with this fantastic take on Space Invaders." - xblaratings.com

"This is THE best shooter in the indie games section of it’s type right now and is definitely worth a buy whether you’re into these or not." - Wasted Seconds

"Decimation X does for Space Invaders what Pac Man: Championship Edition did for Paccers. The cat vomit visuals betray what is a very astute and thoughtfully-arranged modernisation of the 1978 arcade game. It's Space Invaders meets Bullet Hell - and because the shields don't regenerate of their own accord, players are forced to deliberately weave their crafts through a torrential downpour of enemy spew to collect essential power-ups, creating an exhilarating cat and mouse dynamic that Space Invaders re-imaginings rarely possess. An intense, thrilling shooter that easily out-guns more illustrious XBLA rivals such as Infinity Gene and Space Invaders Extreme." - CVG

"Decimation X is the best value of any indie game I've ever played, and that even includes "I MAED A GAM3 W1TH Z0MB1ES IN IT!!!1"." -  Destructoid

"I should mention that I never really liked Space Invaders, but absolutely fell in love with this game after 10 minutes of play...something to think about." -  Destructoid

"...the fact that its creators (Jason and Matthew Doucette) managed to take such a contrived, boring videogame convention and make a game that somehow feels fresh and exciting is part of what makes this game so special." -  Destructoid

"...pretty much anyone can pick up and enjoy the game." -  Destructoid

"After a few minutes of playing, you'll notice the volume of enemy fire increase from "laughably unthreatening" to "OH MY GOD THE UNSTOPPABLE DOWNPOUR OF LASERS JUST RIPPED THOUGH ALL MY SHIELDS LIKE NOTHING and now I'm dead..."." -  Destructoid

"Between this game and Chime I'm getting some sick play value thanks to XBLA games, been playing more Decimation X than Bioshock 2." -  Destructoid

"...just wanted to share some info about a game that's been providing me with enormous play-value for only a dollar. Trust me when I say that my description, as well as the images and movies I posted, don't really do this game justice--you need to play it for yourself. If you're a fan of quality minimalist games, man-level difficulty games requiring "mad skillz", or if you just like shooting lots and lots of shit at aliens, you are brain-dead if you don't at least play the trial version of this little gem." -  Destructoid